Improv Comedy shows this week at the Broadway Comedy Club NYC are going to be amazing. Click links for discount tickets. ($25 at the door, $5-10 online via NYIT) Scroll down for specific show information and talent line-ups.

***LMAO Saturdays 8pm SELL OUT every week so buy your tickets early!!!

ON THE SPOT NYC Mondays 8pm

Monday 8pm ON THE SPOT

Improv Comedy based on audience suggestions and participation. Think WHOSE LINE IS IT ANYWAY Broadway Style. Big energy. Tons of Fun. And there is no better time to go to an interactive comedy show. CLICK HERE for discount tickets to 2/27 show!

Lets explore Donald Trump, Hillary Clinton and the rest of the gangs together. Comedy can be our therapy in this time of WTF!?! Laugh it off…

COME BE PART OF THE SHOW!!! 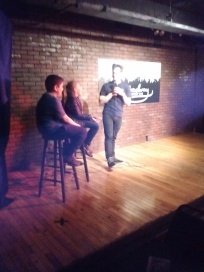 “A show you and your children don’t want to miss!” ABC NEWS 7 NY

Basically the same show as LMAO but you can bring your kids, and parents – grandparents too!  Lots of kids get on stage.  CLICK HERE for discount tickets to 2/27 show

Do you live in the Village? Student at NYU? Visiting Downtown NYC area? Then check out the Greenwich Village Comedy Club at 99 MacDougal Street, near Washington Square Park. CLICK HERE for discount tickets. Professional Shows 7 nights/week!