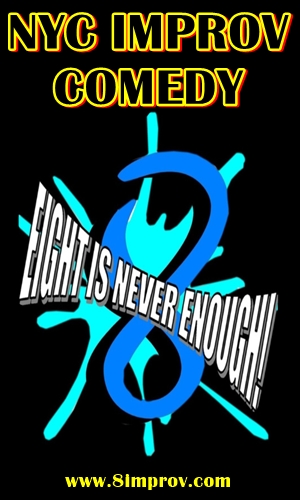 We have been selling out almost every Saturday since September, with rare exception, but usually that is with a few walk-ins and last minute sales online the day of show.

We are close to being completely sold out NOW. So if you have plans to join us Saturday, buy NOW. And going into spring, we will have this wonderful problem weekly.

CLICK HERE for full calendar of Improv at the Broadway Comedy Club NYC.

LMAO OFF BROADWAY presents hilarious interactive musical comedy. The cast of EIGHT IS NEVER ENOUGH delivers original scenes and songs based on your suggestions and participation. No two shows are ever the same. Think WHOSE LINE IS IT ANYWAY meets Off-Broadway Musical with a touch of MTV. Great comedy. Great Music. Great Theater.

3pm SATURDAYS Fun for the whole family – AKA Improv 4 Kids but this show is not just for kids. Because the performers keep the show clean enough for families, the story telling is amazing. No easy crass jokes. Great Theater!

8pm SATURDAYS – Our flagship show, this is the show we present at colleges and corporate events. The public shows are unpredictable because you drive the show. But these days you can bet there will be plenty of Politics and other topical scandals. The entire cast is getting plenty of experience playing Donald Trump, including the ladies.

8pm MONDAYS ON THE SPOT – LMAO cast mate Nathan Armstrong created this new show, featuring the cast of EIGHT IS NEVER ENOUGH improvising the book of a brand new musical comedy adventure every week based on songs performed by a rotating cast of Cabaret Artists.

Are you in the mood for Stand-Up Comedy tonight. CLICK HERE for discount tickets. LIVE All-Star lines-ups seven nights/week at the Broadway Comedy Club.