With over 5000 shows in 10 years, we have had many cast members over the years. These days we have as many as 3 casts working events at the same time and growing fast. Here are just some of the many talented faces gracing our stage…

Walt Frasier is the co-founder of EIGHT IS NEVER ENOUGH!  He has performed over 4500 Comedy shows since 2002 and currently serves as General Manager. Recent TV credits include appearances on NETFLIX’s “Lilyhammer”, USA’s “Royal Pains”, CBS’s “Blue Bloods”, multiple comedy bits on The Late Show (CBS/ Letterman aka “Lance Armstrong”), Nickelodeon’s  “Naked Brothers Band” (Monkey Buttz Comedy Club Host)  MTV’s “Stankervision” (featured sketch comedy segment), Cartoon Networks “Adult Swim” and several national commercials including 2 where he appears with Dr Oz..  Walt has also been featured multiple times on the WE Network’s reality show “Hair Trauma” for his expertise in leadership and team building.  Prior to working with “Eight is NEVER Enough”, he toured with the 2nd Nat tour of Scarlet Pimpernel, performed regionally in Fiddler on the Roof at Gateway Playhouse and in numerous musicals and plays in the DC area.  Favorite roles include Harold Hill (Music Man), Rodolfo (La Boheme – the original Rent), Molokov (Chess), Jack (Where’s Charlie) and Frederic (Pirates of Penzance). Walter’s first paid NYC job was playing the lead male role in Fred Ho’s WARRIOR SISTERS Off-Broadway (read NY Times Review). He later reprised the role at the regional debut at the Gammage in Tempe AZ (ASU).

Amelia Fowler, a native of Brooklyn, New York, can  be seen in the upcoming motion pictures “Top Five”, starring Chris Rock and “Learning to Drive” starring, Sir Ben Kingsley as well as “Monica Z”, directed by Per Fly as Ella Fitzgerald and “Orange is the New Black”, directed by Jodie Foster.  Amelia has been seen in commercial spots for Cablevision, the History Channel, IFC, as well as comedy venues throughout the U.S. with her fellow cast mates of the improv troupes “Comedy Sportz – New York City” and “Eight is Never Enough.” Amelia has also had the good fortune to perform in the GLAAD award winning “She Like Girls” at the Ohio Theater as Regina and her one woman show “Flozetta” performed at HERE as part of the “Downtown Urban Theater Festival” and the movie . Amelia currently serves as Client Relations Manager for EIGHT IS NEVER ENOUGH so if you are booking a private event or outreach program, expect a friendly call. Visit her website at AmeliaFowler.com

Patrick Reidy is a current improviser for Eight Is Never Enough, LMAO, and Improv 4 Kids both in NYC and touring nationally.  In addition to serving as MC and guitarist for most shows, Patrick currently serves as casting director for the troupe, making sure every shows is packed with great talent. He is also a co-creator and performer for the musical improv show Big D & The Closers.  As a comedian, his sketch writing and performances have been featured on the Huffington Post, College Humor, and Funny Or Die.  For more information visit http://www.thepatreidy.com or follow him on Twitter @ThePatReidy. 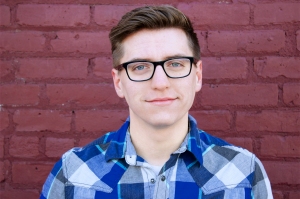 Christopher Catalano, member of EIGHT IS NEVER ENOUGH since 2007, was born and raised in New Orleans, LA. He worked on a shrimp boat, he did shows at the World’s Fair, and in the French Quarter. At the age of 15 he moved to Florida, and did theatre in Daytona Beach and surrounding areas before attending Florida State University. After college he moved directly to NY where he booked his first audition for a production of Romeo & Juliet. This was the first of many professional productions of the Bard’s work, as of 2015 he has performed Shakespeare in 38 states. Since returning to NYC, he has appeared onstage in over 75 plays (from Lanford Wilson to Trey Parker), and performed as an improvisational comedian over 500 times. As a writer he has had 5 plays produced and published, and his pilot, “Open Bar,” was a semi-finalist in Bravo Television’s reality competition, “Situation: Comedy.” http://www.christophercatalano.com/

Since Andy moved to NYC in 2011, he has performed with 8 is Never Enough. While attending Salem State University, he was part of Grandma’s Third Leg, a brand new improvised comedy troupe. He hasn’t stopped doing comedy since. He also can be found performing at the Jekyll & Hyde Club, and commentating at Paragon League Wrestling in Woodbridge, CT under the name Chops McManus. (www.paragonleague.com) You can also find him doing karaoke somewhere. Give him a high five.
Twitter: @andyscannell  @chopsmcmanus
Instagram: andyscannell
Vine: andyscannell

John William Rhea is made his debut with Eight is NEVER Enough in the fall of 2009 with LMAO Off-Broadway! Ever since then he has been busy doing Improv shows for school groups with EINE. In Los Angeles John performed Improv for three years at multiple venues. Recent stage credits include: The Sweetest Swing in Baseball, Moby Dick Rehearsed, The Laramie Project.  “Pirates be the best thing, thanks to those who believed in me and didn’t make me walk the plank!”

Olivia Howell, a Kansas City native, is proud to call NYC her new home. She is thrilled to be a part of the cast “Eight Is Never Enough.”. New York Credits Include: Phantom of the Improv and Berenstain Bears (off-broadway), You are Not Alone- An uplifting show about depression, Fancy Nancy, The 39 Steps, Jekyll and Hyde, Goldilocks and the Three Bears, Peter Rabbit, and A Year with Frog and Toad. Make sure to catch Olivia on Oxygen’s upcoming show “My Crazy Love,” and her commercial debut for “Kaboom Sticks.”  As always, she thanks her parents for their undying support and never forcing me to become a doctor or anything moderately lucrative.

Paul DeGrocco has performed with Eight is Never Enough Improv since November of 2009. He is most well known as the On-Field promotions host /mc for the Long Island Ducks Baseball Club and as Long Island’s Official Greeter (as voted by Newsday readers). Paul’s career has stretched over many different genres of performance. Off-Broadway: LMAOFF-BROADWAY. Regional Theater: THE WIZARD OF OZ (The John W. Engeman Theater), IMPROV 4 KIDS (Tour), A CHRISTMAS STORY (Broadhollow Theater). TV appearances include CHAPELLE’S SHOW (Comedy Central), SINGULARITY (The Discovery Channel) and THE PAVEMENT (Cuest Films).  Paul has also hosted radio shows for WNYG and The World Famous WLIR. In addition he has also appeared in numerous corporate training videos, independent films, has voiced many radio commercials and was named Hofstra University’s Alumnus of the Month in May of 2010. More at  PaulDeGrocco.com

Evan Schultz has been performing with the Eight Is Never Enough Improv troupe since 2009! This New York native is a graduate of Wagner College with a BA in Theatre Performance as well as Voice and Speech. Off Broadway: LMAO, Isabelle and the Pretty-Ugly Spell, The Gayest Christmas Pageant Ever. Off-Off Broadway: Lost Boys or an Awfully Big Adventure, JAR’D, Isabelle and the Pretty-Ugly Spell, Hollywood-Hollywood!, Booth! The Musical, Dickens Condensed. Regional Theatre: Jekyll and Hyde. A Wonderful Like, Grand Hotel, Into The Woods, Sleeping Beauty, Charlie and the Chocolate Factory. Touring Theatre: Improv4Kids, Charlotte’s Web, 1776, A Christmas Carol. TV/Film: 30 Rock, Law and Order, Gossip Girls, Fringe, Cupid, When in Rome. Thank you to The Entertainment Group, friends and family for the love and support.

Thomas Burns Scully is a British born writer-performer, now living and working in the States. He is a Max Fischer Award winning graduate of the American Academy of Dramatic Arts, and has been performing with Eight is Never Enough since 2013. Notable projects as an actor include: appearing in the award-winning short film “The Boy Under the Piano”, the New York Times critically-acclaimed “A Girl Without Wings” (For which he also composed the score), and an upcoming appearance on Martin Scorcese’s HBO pilot ‘The Rock and Roll Project’. He has been playing the guitar and the banjo since age ten, and his work as a musician is available online. As a writer, his work has been produced on three continents. He also workshops new plays with his theatre group ‘Ruffian Productions’ and writes reviews and editorials for OnStageBlog.com/
http://thomasburnsscully.wix.com/thomasdbs
https://www.facebook.com/pages/Thomas-Burns-Scully/387088688070772?ref=hl
https://soundcloud.com/thomas-david-burns-scully