WANT TO PERFORM? We take performance requests form all of our students seriously. We also accept resumes from other young performers. Must have experience on stage at another NYC Comedy Club if not one of our students/colleagues. Email us headshot, resume, short bio and video links  to eightimprov@gmail.com

EIGHT IS NEVER ENOUGH presents LMAO OFF BROADWAY
Sundays 8pm June 4, 18, July 2, August 6
$20 at the door (Click here for $5 tickets) there is a 2-drink minimum
This series is designed for 18+ audiences. Help the cast of EIGHT IS NEVER ENOUGH tackle the headlines as they create original comedy based on your suggestions and participation. This show also tours colleges, clubs and corporate events nationwide

3pm MATINEES FOR THE WHOLE FAMILY
Selected Saturdays / Sundays 3pm. Added Shows for Vacation / Holidays
$25 at the door (Click here for $10 tickets)
LIVE COMEDY THE ENTIRE FAMILY CAN ENJOY? YES! Every weekend – unless sold out for private birthday parties etc the cast of EIGHT IS NEVER ENOUGH delivers their PG-rated version of LMAO. Bring your cameras and catch your future stars on stage. 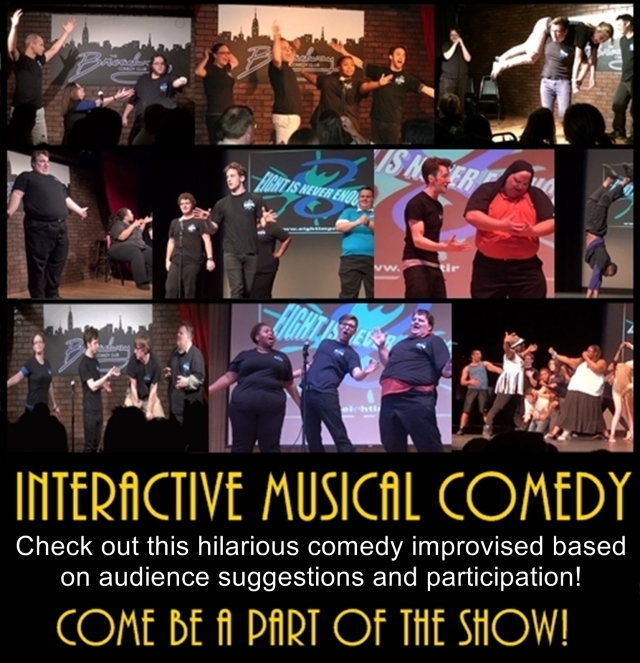 FALL CLASSES for KIDS & TEENS
Saturday 10am Teens 13-17
Saturday 10am Kids 8-12
Sunday 10am Teens 14-19
Every week includes 60-75 minutes learning Improv Comedy including warm-up, technique and performance games. The final 30-45 minutes is an open mic type session where students develop stories from their own experiences and observations into original stand-up comedy material. Every class ends with a final showcase featuring both Improv & Stand-Up Comedy