WHOSE LINE IS IT ANYWAY: 5 years of Scenes from a Hat

WHOSE LINE IS IT ANYWAY

5 years of Scenes from a Hat

Awesome compilation. A little risque for some younger students but a great way to learn how to play this game and other similar quick joke forms.

Many performers on this video…

Drew Carey hosted the first U.S. version of Whose Line?. The two permanent performers throughout Carey’s tenure as host were Colin Mochrie (third seat) and Ryan Stiles (fourth seat), both of whom had been regular performers in the UK version of the show. Stiles first appeared in UK season 2, in 1989, while Mochrie made his first appearance in UK season 3, in 1991. By 1995, they were both appearing in every episode of the UK series, which continued through 1998 even as the US version of the series was being made.

Wayne Brady appeared as a frequently recurring performer during the first season of the US show (appearing in 16 of the season’s 20 episodes) and became a permanent regular during the second season, always appearing in either the first or second seat. After appearing in every episode of seasons 2 through 7, in the eighth season Brady appeared in only 17 of the 21 episodes (which was made up of unused episodes taped for season 1). 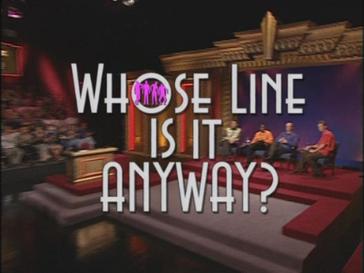 WHOSE LINE IS IT ANYWAY

MORE ABOUT THE SHOW

Whose Line Is It Anyway? was created by Dan Patterson and Mark Leveson in 1988 as a radio show on BBC Radio 4 in the United Kingdom. This early incarnation of the show is notable as being the origin of its tradition of having the performers read the credits in an amusing style; as it was a radio show, it was necessary for somebody to read the credits, and it was decided that it might as well be done as part of the program, rather than being done by a traditional BBC Radio announcer. This approach to reading credits was pioneered by the earlier BBC radio show I’m Sorry, I’ll Read That Again. Indeed, the title of the show itself is a comedic riposte to another radio show, What’s My Line, merged with the title of a 1972 teleplay (and eventual theatrical play) Whose Life Is It Anyway?.

The radio series lasted for six episodes, after which Channel 4 developed the franchise for television. The British television version lasted for a total of 10 seasons, with 136 episodes, all of which were hosted by Clive Anderson. Colin Mochrie and Ryan Stiles, who would later star in the U.S. version, became regular cast members in the seventh and eighth seasons.

The UK series was brought to the attention of Drew Carey, who worked with regular Whose Line? performer Ryan Stiles, a co-star on The Drew Carey Show. Carey convinced ABC to air test episodes in the United States. The show turned into an inexpensive hit (though less so than the British version), and ABC kept Carey on as host. The show ranked 29th in its first season, averaging 13.1 million viewers per episode.[9] The show ran on ABC for six seasons, benefiting from the low expectations of its Thursday night time slot, as ABC was not expected to mount a serious threat to what was thenNBC‘s longtime Thursday dominance in the Nielsen ratings. While the network would regularly premiere two new episodes in one night, there were several occurrences in which some episodes were skipped or postponed until a later date because of the airing of other new shows or specials.[citation needed]

The format of the American version was very similar to the British program. A major difference was Carey’s use of the game-show facade, explicitly stating at the start of each episode that “the points don’t matter,” and sometimes emphasizing this throughout the episodes. The difference in standards in the UK compared to U.S. prime time meant stricter censoring of both language and content on the U.S. series.

Production of the American version was canceled by ABC in 2003 because of low ratings, with already-produced episodes airing first-run into 2004. The ABC Familycable channel, which had been airing repeats of the show since 2002, also showed “new” episodes from 2005 to 2007, formed from previously filmed but unaired performances.

Like Loading...
This entry was posted in JUST FOR FUN, Learn to Improvise and tagged anyway, artists, arts, broadway, bully, character building, classes, comedy, community, corporate, creativity, how to, improv, learn, line, new york, nyc, scenes from a hat, whose. Bookmark the permalink.
%d bloggers like this: