POGS have played an important, yet sometimes overlooked, part of world history…

– 1600-1800 Roughly 600 years ago Japanese Fisherman created a game called Menko. The game was made popular by the Shoguns of the Edo Period. Some claim Menko may have been considered a national sport.

– 1930s Workers at Haleakala Ranch, including many immigrants from Japan, play a new version of Menko. But it was the children that took elements of Menko and created their own game, at the time called “Milk Covas”

– 1990 Theodore Milles sees his Son, Bobby, playing with Milk Caps and gets idea to create the Professional Organization Of Pogs as a way to reconnect with his alienated family. The 1st National P.O.O.P. Championship Competition is played and won, shockingly by Bobby Milles.

– 1991 Hawaiian Teacher, Blossom Galbiso, (AKA MOTHER OF POGS) tells students of the game she played as a child. This is officially the start of the international craze. In the early months a number of Hawaiian Companies produced Milk Caps with amazing art work. Many schools made and sold Milk Caps as fundraisers.

– 1993 Alan Rypinski (most famous as the marketing genius behind ArmorAll) trademarks the name, “POG”, and the popular character, “POGMAN” (Basically cross between Caveman and a Surfer Dude), and creates World POG Federation. The company quickly becomes the largest seller of milk caps in the world. Theodore Milles states that he never thought his son’s favorite game would become so big and regrets not trademarking the idea sooner. Do to risk of trade mark infringement and law suit, Theodore Milles changes name to Professional Organization of Poggz.
Check out these POG commercials now on YouTube
http://www.youtube.com/watch?v=Lr_kkdmLf7I&NR=1
http://www.youtube.com/watch?v=sq9r50EYJh0

– 1995 Rypinski gives up control of WPF to investors. Read More In the same year Slammer Whammers have their best year. Theodore Milles petitions the The International Olympic Committee to allow Milk Caps as a Demonstration Sport at the 1996 Summer games in Atlanta.

– 1996 1000s of Schools around the world ban milk cap gaming on campus, claiming they are a form of Gambling. World POG Federation stops operation (SOURCE). ALL Plans to include POGS in the 1996 summer Olympic games canceled for fear of bad press.

– 2001 US Military issues Milkcaps as a form of Currency in Iraq and other operations around the world. Milk Caps are lighter than coins and more durable than paper currency.

– 2005 Funrise Toys buys the POG name and WPG resurfaces as the Global POG Association. POGS are BACK!

– 2006 Fuel Industries plans an online version of the game. READ MORE  EBAY and other online sources still the best way to boost your collections. By the end of the year Funrise stops POG production.

– 2007 For the first time in eleven years, the number of spectators out numbers the number of players in the National Championship Competition.

– 2011 SGF PRODUCTIONS, a NYC based company, is filming making documentary, “P.O.O.P.” about the milk cap phenomena and the Professional Organization of Poggz 22nd National Championship Competition. 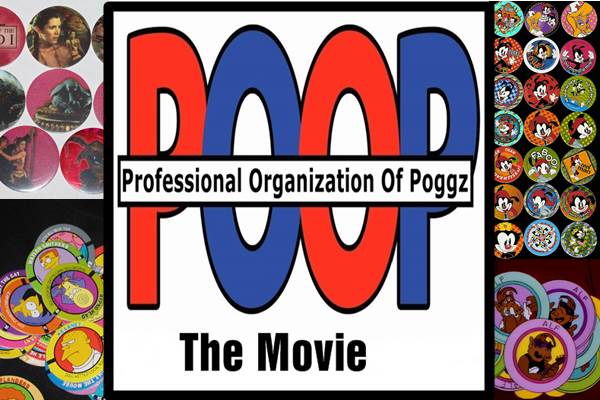 NOTE: History above is mostly all true – except for a few POOP related insertions LOL