Friday, May 1, 2015 New York, NY – The Broadway Comedy Club and SGF Productions have come together to create THE NEW YORK IMPROV THEATER. Formerly THE RED ROOM, this 70-seat theater is still home to great shows such as LMAO Off-Broadway and Improv 4 Kids. And now they are home to numerous New York City based Improv Teams.  Starting May, the room features 3-4 sketch and Improv troupes for a HAPPY HOUR showcase every Friday at 6:30pm. The club has waived all drink minimums for this series (Seriously a REAL Comedy Club in NYC foregoing its TWO drink minimum). In fact the $10 cover includes your first beer, wine or soda from the bar and the Broadway will be offering a number of happy hour drink specials 6-8pm.

The series is designed to bring great Improv out of the basements and back of random bars around the city. The goal is to create a new home for the best intimate and spontaneous theater Manhattan has to offer. Both players and fans will love the venue, which sports a grand piano for musical acts, great stage and full bar. The Broadway is part of the Times Square theater district, attracting both locals and tourists to relax and mingle before heading to Broadway and other Friday night plans.

Another new series growing in popularity debuted on Monday April 20. ON THE SPOT NYC, the brain child of Nathan Armstrong, featured amazing singers from the New York musical theater scene singing their hearts out and inspiring Improv by cast members from LMAO OFF BROADWAY. After each song the players break out into scenes based on titles, lyrics and themes. The result was possibly the most innovative show seen in years. ON THE SPOT NYC returns Monday May 18 at 8p ($25 plus 1 drink minimum).

Since 2011 the cast of EIGHT IS NEVER ENOUGH Improv present LMAO OFF BROADWAY Saturdays 3 & 8pm. The 75-minute show features interactive musical comedy based on audience suggestions and participation. Imagine WHOSE LINE IS IT ANYWAY with the Off Broadway treatment. 3pm show (AKA Improv 4 Kids) are fun for the whole family. With over 5000 shows in Times Square and touring nationwide since 2002, the show has previously runs at the NEW YORK IMPROV and LAUGH FACTORY as well as OFF BROADWAY at the Midtown Theater.

Happy Hour Line ups for May 8, 15, and 22 are already on the website; so for the most up-to date schedules, discount tickets and information check out the action at https://newyorkimprovtheater.com/about/fridays-630-long-form/

Friday May 22 6:30 Featuring My Neighbor’s Neighbor, Invasion of the Body Snatchers, Hand Me Downs, Uncle Taft, Call Your Mom

ON THE SPOT NYC 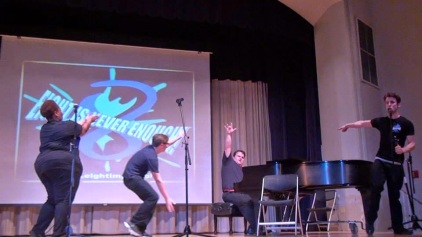