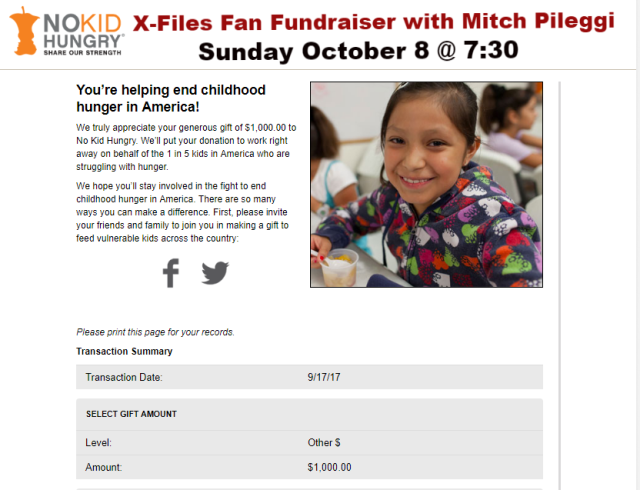 This nearly sold out New York Comic Con off site event, co-hosted by EIGHT IS NEVER ENOUGH Improv,  DUCHOVNIACS.com and MITCH PLEDGIES, is raising money for NO KID HUNGRY.

Mitch is best known for his nine years as Assistant Director Walter Skinner in the FOX series THE X-FILES and for his role as Horace Pinker in Wes Craven’s SHOCKER. as well as his DALLAS, SONS OF ANARCHY, GREY’S ANATOMY, STARGATE: ATLANTIS, SUPERNATURAL, MEDIUM, LAW & ORDER: SPECIAL VICTIMS UNIT, and the films RECOUNT, FLASH OF GENIUS, and THE X-FILES: FIGHT THE FUTURE & THE X-FILES: I WANT TO BELIEVE.

And if you have not met Mitch in person, you are missing out. One of the nicest most personal guys EVER!

In addition to contributing to the Duchovniacs website and activities, Walt Frasier is a professional actor/comic with a career including TV, Theater and over 5000 professional comedy shows in Times Square and touring Nationwide.

Similar to WHOSE LINE IS IT ANYWAY, the cast of EIGHT IS NEVER ENOUGH delivers original scenes and songs based on audience suggestions and participation. So with this crowd you can assume some X-files Themes Songs and Sketches…