See live comedy in NYC tonight, sponsored by
nycomedytickets.com and www.corporate-comedy.us
CLICK LINKS below for discount tickets and class registration.
Scroll down for more info.

Join us every Saturday 10am for a morning of Improv Comedy games. Each week in March a different professional player from the ranks of EIGHT IS NEVER ENOUGH will lead a series of warm-up, technique building and performance games. These are public versions of the workshops we present to corporate groups for team building as well as management, sales and service training. But most importantly, we have a ton of fun. Come play with us!

This British born actor just appeared in Broad City on Comedy Central. Thomas has been playing and teaching with EIGHT IS NEVER ENOUGH since 2013.

Currently the EIGHT IS NEVER ENOUGH Company Manager, Sam is a dynamic teacher and improviser with various film, TV, commercial and theater credits. Already a NYIT fan/student fave!!!! Member since 2017.

Did you see Amelia recently on the new hot show FBI? Other recent films/TV projects include rolls in TOP FINE (with Chris Rock), LEARNING TO DRIVE (with Sir Ben Kingsley), MONICA Z (as Ella Fitzgerald), POWER, BULL, ORANGE IS THE NEW BLACK and more… The former Company Manager of EIGHT IS NEVER ENOUGH has been playing and teaching here since 2009.

Have you seen Ivana Mendez in Start-Up with Marty Freeman? Check out the show on Crackle, where Ivana appears in three episodes as Marty’s daughter, Finley. Member since 2016. 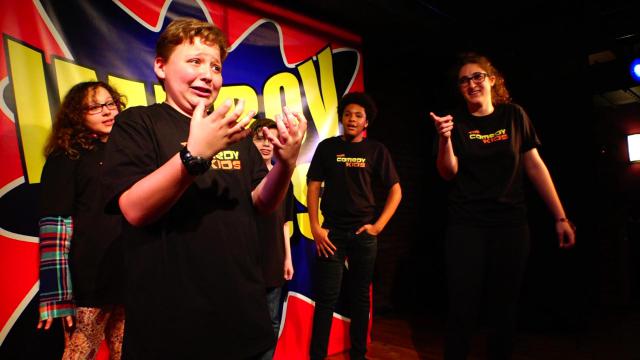 Improv and Stand-Up Comedy help students discover their best selves building self confidence, creative writing, critical thinking and public speaking. We offer weekly classes Winter, Spring and Fall, plus Summer Camps. We also have teachers at schools, camps and community centers on weekends and after school. Each session starts with Improvisation, playing games that are a ton of fun while teaching valuable life skills. These are the same games we play with corporate groups to develop better leaders, team building, sales, service etc. For our public sessions we include Stand-Up Comedy, taking stories of experience and observation, then crafting original comedy routines. Each session ends a performance showcase of original and improvised comedy skits. The classes and workshops integrate perfectly with cultural arts, language arts and character building/guidance programming.